Library Update as of Sunday December 2

The Consortium Library will be closed today, Monday and Tuesday.

The goods news is that there were no reported injuries in the Library during the earthquake on Friday.

While there was no major structural damage to the building and its exterior, there was damage inside. Water from a broken pipe in the 4th floor mechanical area leaked into the collection areas in Archives and AMIPA on the third floor. Work is already underway to stabilize the damage and AMIPA currently has equipment and materials drying in Library 307. There were three locations where glycol leaked from the heating systems and on to the floor. The worst leak was near the food vending machines at the north entrance. In numerous locations the suspended ceiling has partially fallen and there is the danger of further collapse in these areas. A large ceiling light fell to the floor in Library 302a, objects flew around in the office spaces, and pictures and signs were damaged.

By far, the biggest impact is on the library’s collections where at least 100,000 volumes fell to the floor. Again the good news is that the shelving performed as it was designed with no buckling or toppling.

The next steps before opening the library are to stabilize or repair the ceiling areas and to start the huge job of reshelving more than 100,000 volumes. We are restricted to small groups reshelving materials given the repair work that is needed around the building in the ceilings. 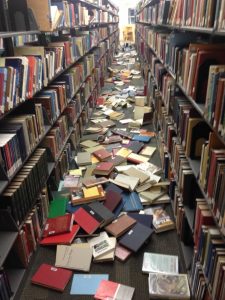