Journey mapping plots a process or service to produce a visual representation of a library transaction, from the point at which the student accesses a service to its final resolution.  The Consortium Library Assessment Team completed a Journey Mapping exercise in 2016, analyzing twelve journeys or service scenarios in the library.

In Spring 2017, we organized a follow-up journey mapping exercise.  Three scenarios that many students found difficult to complete in our first round were re-examined.  The team recruited students on social media and by posting flyers on UAA and APU campuses, and four volunteers completed each of the three follow-up journeys.

The three scenarios we analyzed were:

After the first round of journey mapping, we made changes in the library that could affect the completion of each of these journeys.  Refworks (the citation management tool used in Scenario 1) has settled into one version.  During our first round of journey mapping, Refworks was transitioning to Flow and back to Refworks, and currently, the product has settled into one version.  We also moved the Media Room last summer, so the steps followed in Scenario 2 now entail going to a different Media Room and a new Circulation Desk.  Scenario 3 is affected by a change to our website.  We consolidated different types of guides (topic, course, and how-to) into one link in the Research section.  We were hopeful that a link to Guides would be less puzzling to users than the previous three links to different types of guides.

Please follow the links below to view our full report and the graphical mapped journeys.

by Rebecca Moorman Posted on June 14, 2017
Posted in Uncategorized | Leave a comment

The Library Assessment Team recently conducted a Journey Mapping exercise.  This project — based on the work of librarians at University of Montana — was designed to enhance the student experience of using the library by assessing our services from their point of view.  Journey Mapping is a methodology that analyzes the point at which a student comes into contact with a library service to understand how the services are being used and if they are benefitting students.

Journey mapping and service blueprinting have been used in medicine and business for many years as a model for analyzing customer pathways to identify difficulties in service provision, and the model is making its way into higher education.  This report serves as a basis for a new way of looking at the academic experience; one that reimagines educational offerings and services from the student’s point of view. Further, it partners with students to learn about and eliminate student pain points. 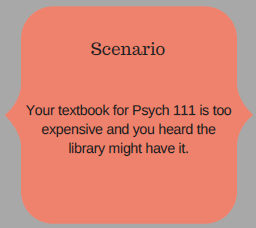 Journey mapping plots a process or service to produce a visual representation of a library transaction — from the point at which the student accesses a service to its final resolution. Service scenarios are identified, and maps are produced that reflect the journey from the student’s point of view. The map is then used to develop an “ideal” journey and to explore changes that would improve the service experience.

Follow the links to read our full report, and view the twelve journeys we analyzed during this pilot project.  We will continue to use this methodology to assess library services and improve the student experience of using the Consortium Library.

by Rebecca Moorman Posted on March 27, 2017
Posted in Uncategorized | Leave a comment

Good news! The library will be increasing its hours for the Spring semester. We appreciate all the feedback we’ve received regarding hours, and we hope that this adjustment will better serve your study needs. 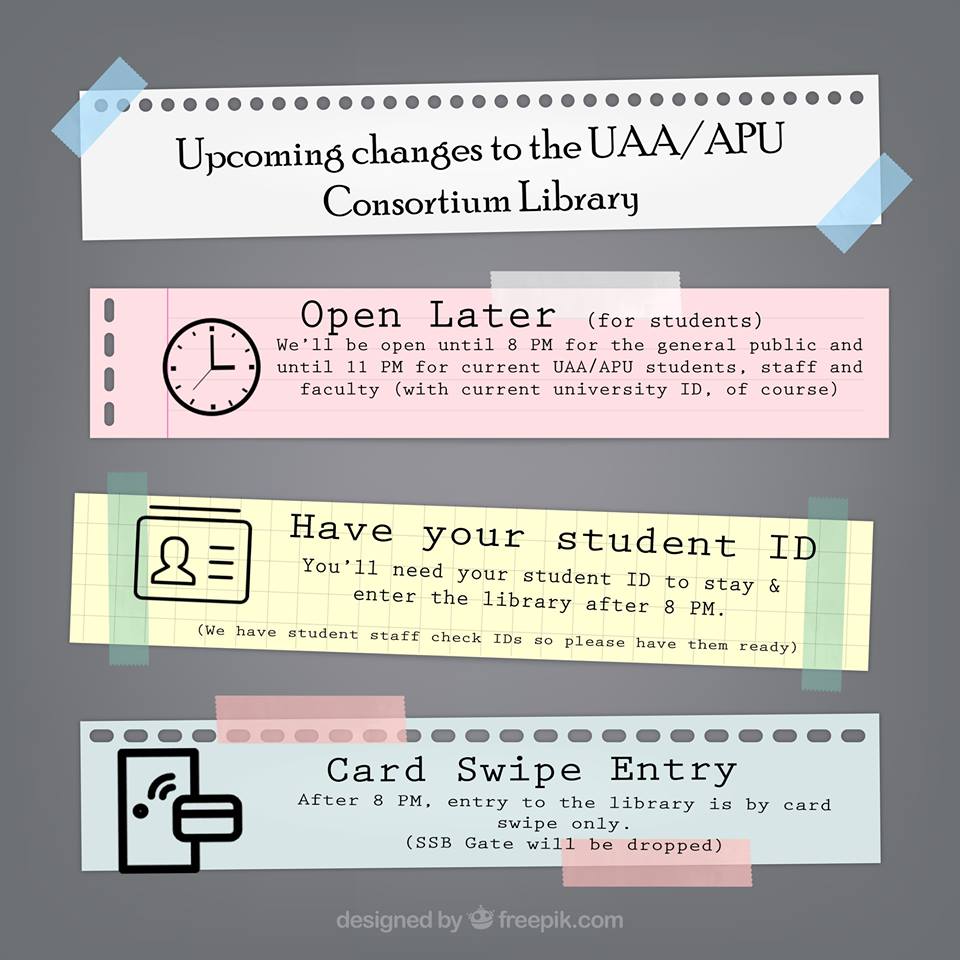 Beginning January 17th, the library hours will be:

**** After 8 PM entry will be through Card Swipe only to UAA/APU students, staff and faculty.

by Rebecca Moorman Posted on January 9, 2017
Posted in Uncategorized | Leave a comment 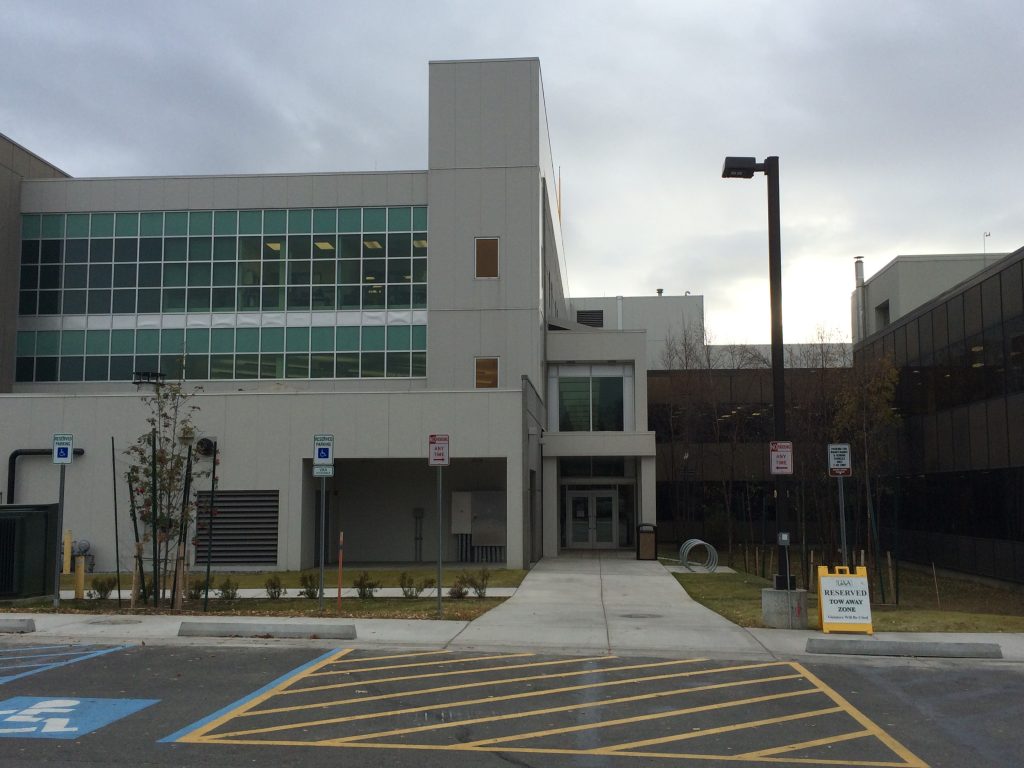 The Consortium Library’s north entrance recently opened, so you can now enter the Library from either side of the building.  Stop by and check out our new circulation desk, multi-media room, and IT computer lab on the first floor!  The indoor campus walkway now extends from Rasmuson Hall to the north side of the Library, shortening the outdoor walk between the Library and the Administration and Integrated Science Buildings. 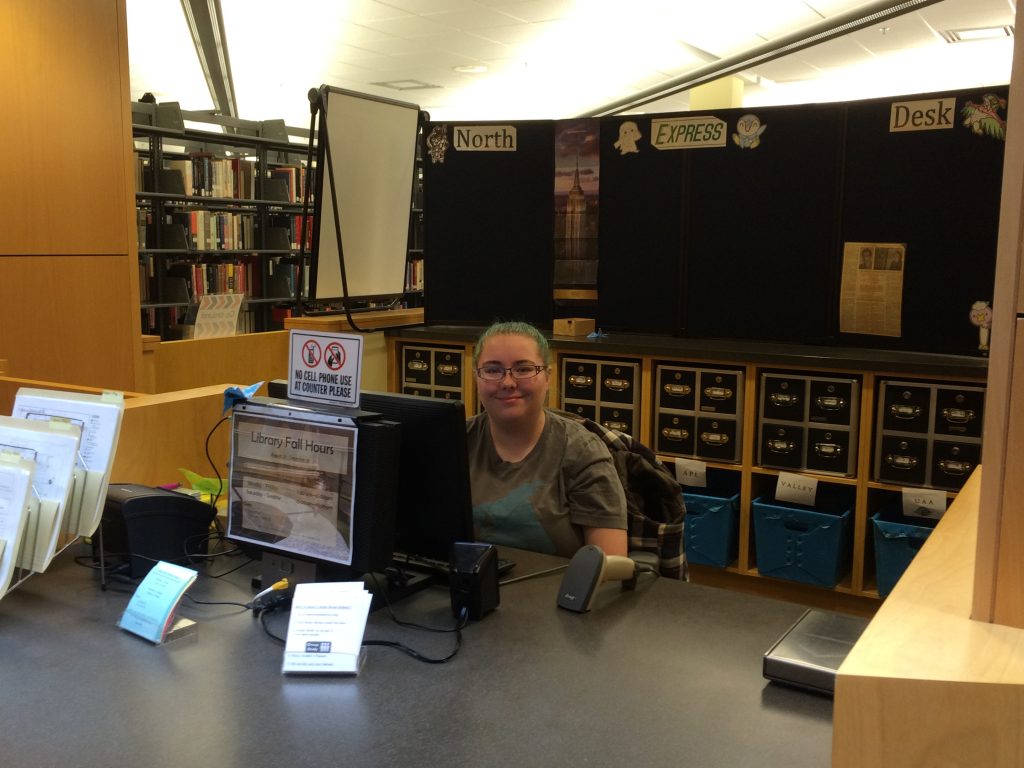 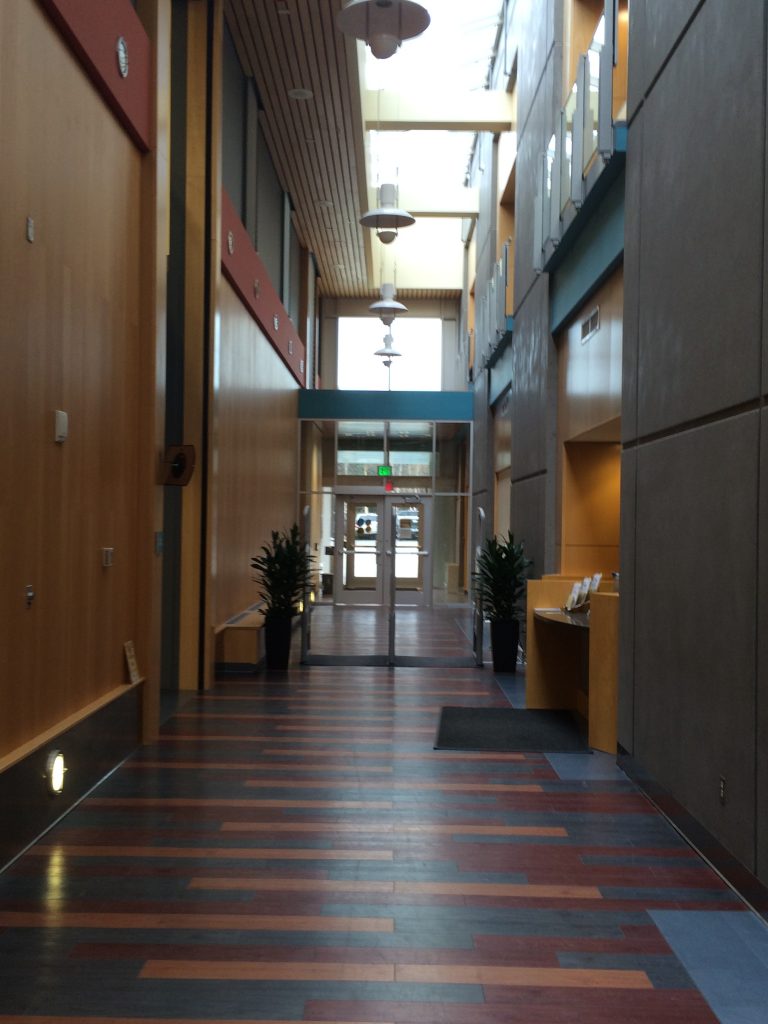 In October 2015, Consortium Library Dean Stephen Rollins wrote this about the upcoming project:

The North Entrance project is long overdue.  When the original 1973 library building was expanded in 2004, the new addition was designed to accommodate a second entrance on the north side of the building.  The plan was to add an arctic entryway once the demand justified its construction.  Based on frequent user comments and complaints and on user surveys, the demand for the north entrance has been steadily increasing over the years. The demand has increased as the campus expanded on the north side of the library building with the construction of the Conoco-Phillips Integrated Science Building, the parking garage, and the relocation of several humanities departments into the Administration Building.  The regular use of the Library for numerous public events every week has also increased the demand as more visitors come to campus and expect access to the building from the north side.  In fact the lack of a north entrance has been the number one complaint about the Library in recent years.

Using FY14 capital funding, the North Entrance project is more than just a second door for the building.  The project will greatly improve handicap access to the Library with parking spaces located just outside of the north entrance. The project also includes a second circulation service desk and a book security system.  With the second circulation desk, the multi-media collection will be moved near the north entrance improving service to this collection. By moving the multi-media collection, the student computer lab on the second floor will be moved to a preferred location on the first floor conveniently adjacent to the library’s reference desk.  Library users will benefit by having immediate access to both reference librarians and IT support.

It is expected that at least 5,000 visitors will use the north entrance weekly during the fall and spring semesters.  When the project is completed, there will be a second library circulation desk and better access to the building, the library collections, and the student computer lab.

by Rebecca Moorman Posted on October 20, 2016
Posted in Uncategorized | Leave a comment

Did you know that the Consortium Library lends out laptops? 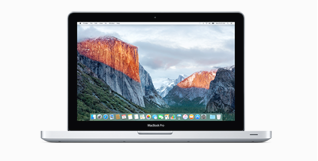 There are 6 MacBooks and 10 Dells that can be borrowed.  You must have a current library account and your UAA or APU student, faculty, or staff ID.  You may check out a laptop for 8 hours, and you are no longer required to use the laptop in the building.

Fines for late returns accrue at $1.00 per hour, up to a maximum of $20.00. If the item is not returned, you will be charged for the full replacement value.

by Rebecca Moorman Posted on July 15, 2016
Posted in Uncategorized | Leave a comment

The Consortium Library has free scanners for your use.  Library users can scan books, articles, papers, photographs … really anything that can be placed flat on a desktop surface at the three Bookeye scanners.  That’s not all.  We also have a microform scanner, capable of digitizing microfilm and microfiche.

Users can save scans to a USB drive or email from the scanner.  We have two Bookeye scanners in the Copy Room on Level One, and a third scanner on Level Two, near the ARLIS atrium. 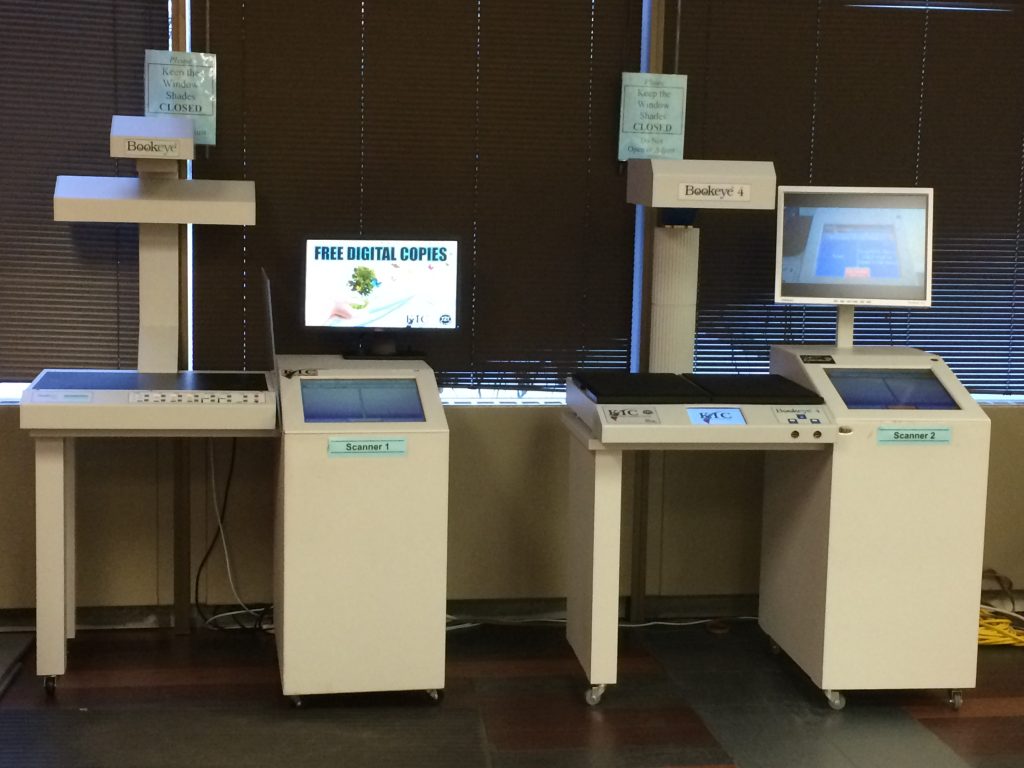 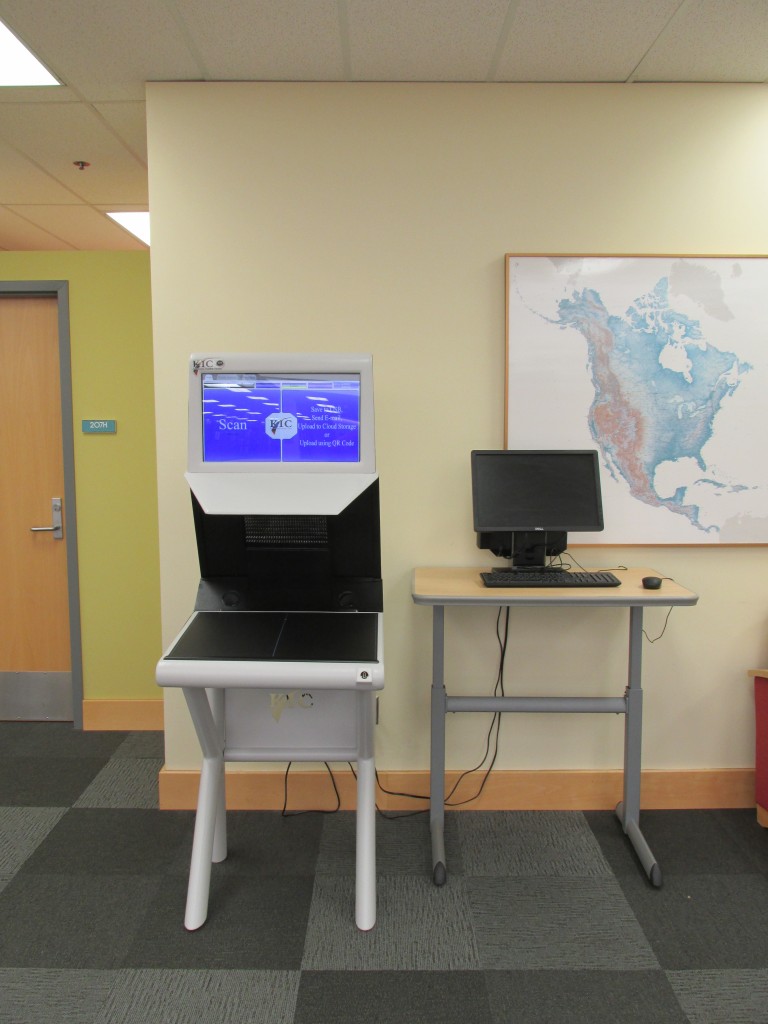 Look for the Microform Scanner in the Copy Room on Level One. 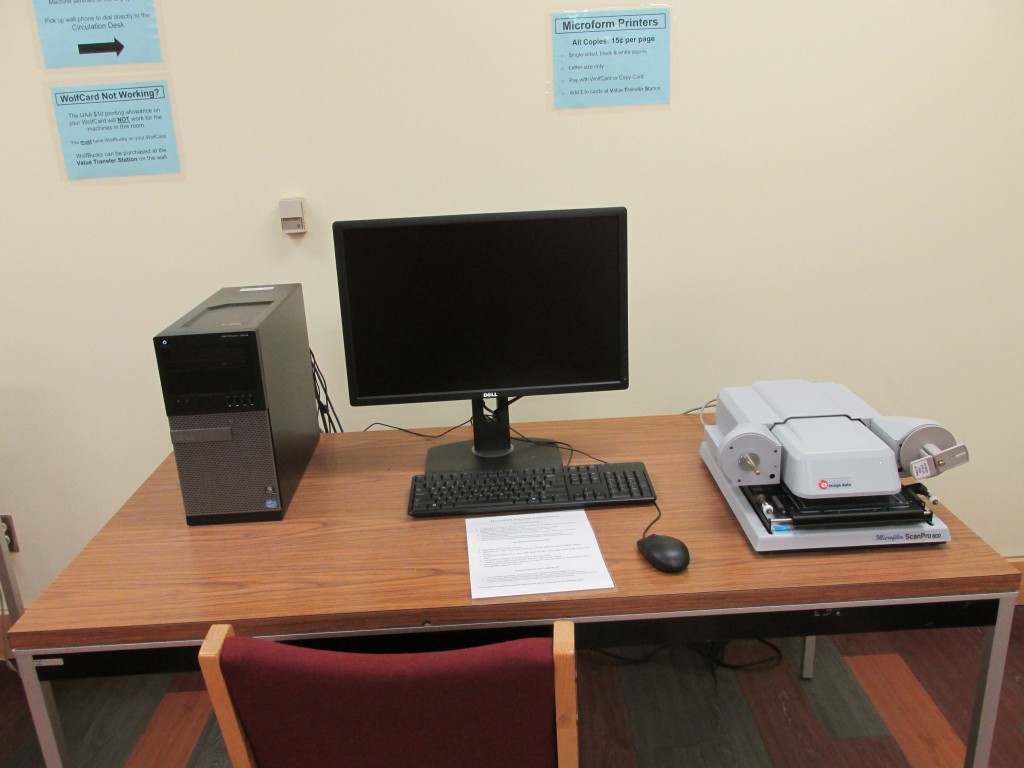 by Rebecca Moorman Posted on May 15, 2016
Posted in Uncategorized | Leave a comment

Have you ever found yourself at school and discovered your phone or your laptop needed a charge?  You scoured the library looking for an outlet, but you didn’t want to put your phone on the floor while you sat somewhere else? 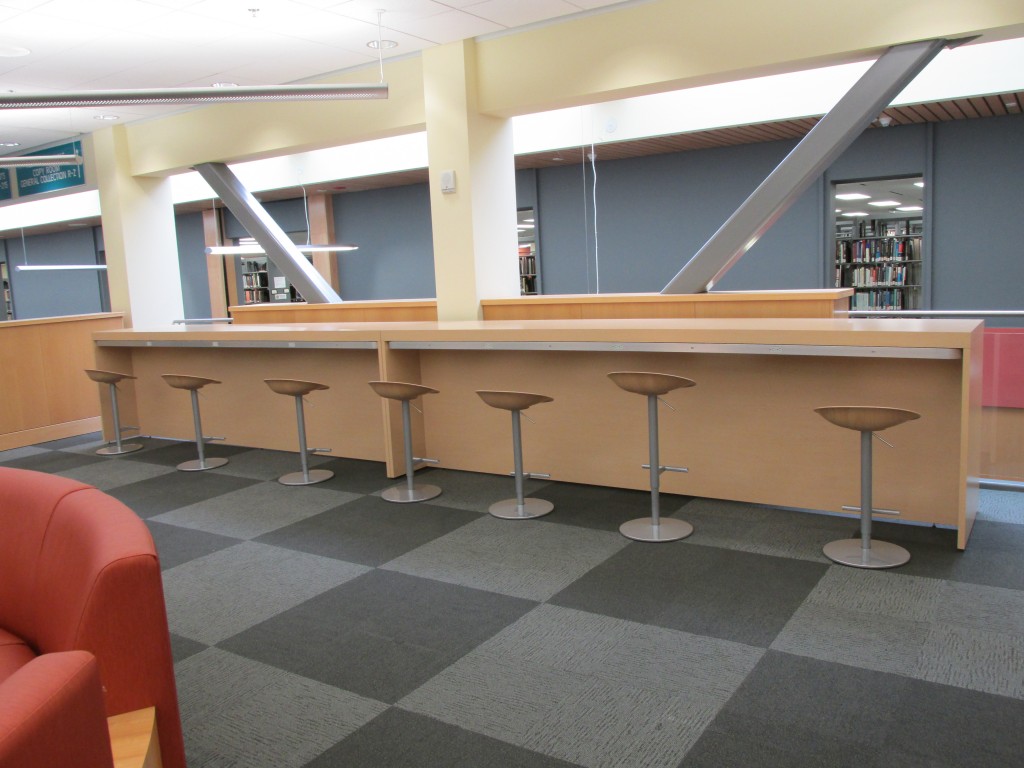 The Charging Bar on Level Two of the Consortium Library has you covered.  You can plug in your device (to an electrical outlet or USB connection) while you’re working, and stop worrying that the next person who walks by will step on it by mistake.

We’ve heard from students that you need more electrical outlets, and we have increased the overall number of outlets on Level Two.  Whether you’re at the Charging Bar or near the Government Documents collection, you’ll find more places to recharge than ever before.

by Rebecca Moorman Posted on March 15, 2016
Posted in Uncategorized | Leave a comment 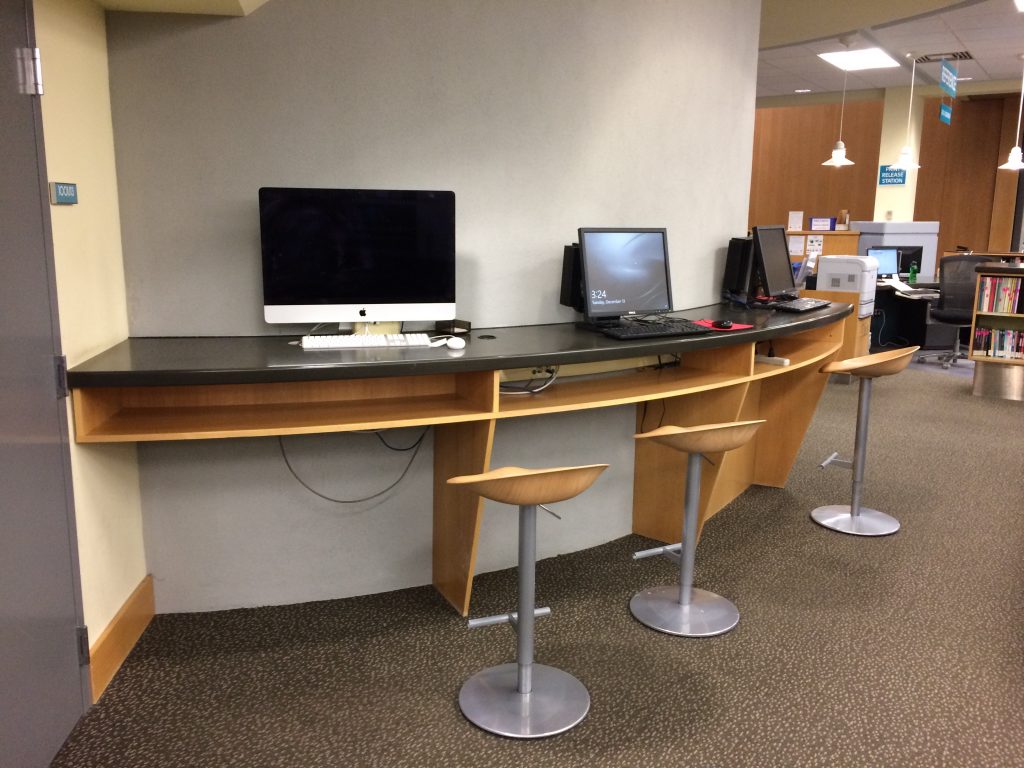 A growing body of evidence suggests that too much sitting is bad for your health.  Studies show that on average, people who sit too much shave a few years off their lives, and they are at increased risk for obesity, diabetes, and other ailments.  On the other hand, workers with standing or sit-stand desks have been found to be more productive, experience less body discomfort, and show greater satisfaction and engagement in their work.

Be sure and look for the computers tucked around the corner from our Foucault Pendulum!

by Rebecca Moorman Posted on January 13, 2016
Posted in Uncategorized | Leave a comment

We have added more study rooms at the Consortium Library. In addition, you can book up to three 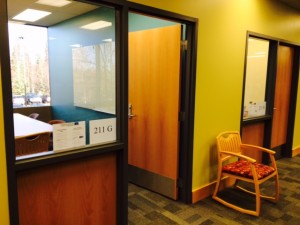 hours at a time for your study group. Go to the Study Room page to book your room.

by abjartmarsdottir Posted on November 4, 2015
Posted in Uncategorized | Leave a comment

by abjartmarsdottir Posted on October 22, 2015
Posted in Uncategorized | Leave a comment