What is that beam of light on the roof all about? 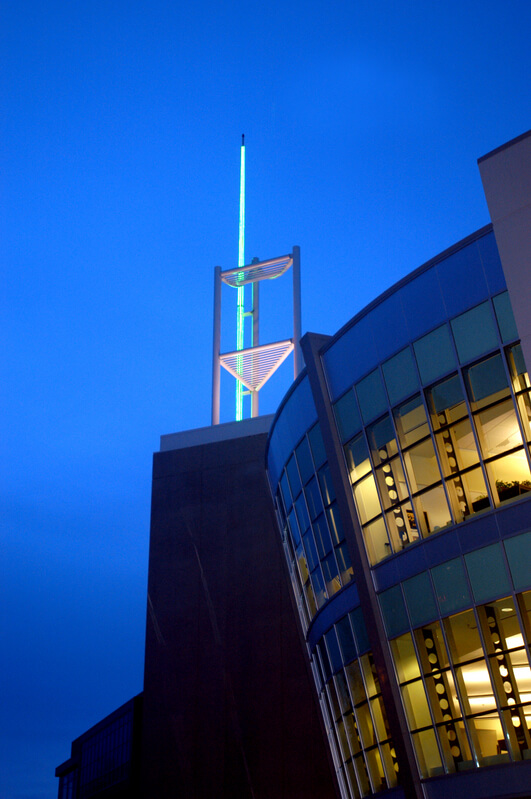 The UAA/APU Consortium Library is a hybrid building, combining the best of traditional libraries, information technologies, and cutting edge design features—including a bright light atop the library roof.

A pseudo bell tower was planned for the top of the library, similar to the bell towers that grace library buildings on campuses across the country. The original design called for a rectangular bell tower that was later changed to accommodate UAA’s recently adopted logo, the UAA swoosh.

The design also called for a laser light to shine directly upward as a "Beacon of Knowledge." According to Stan Vanover, Senior Project Manager for Facilities Planning and Construction, a laser light was initially considered, but because of ongoing costs and extra maintenance requirements, the concept was abandoned.

Instead, a green LED display was installed on the top of the library. Vanover added, "UAA green and gold were the only two colors that we ever really discussed and since green is significantly more visible than gold or amber, green was the preferred color." In 2016 when the LED display was replaced as part of routine maintenance, the color was changed from green to gold.

What is an LED light display? LED stands for "light emitting diode," a device made from a special semiconductor, such as gallium arsenide phosphide, that optimizes visible light output when an electric current passes through it. Semiconductors are crystals that are resistive; that is, their properties lie somewhere between conductors and insulators. When impurities are added to the crystal (called doping), they display interesting properties and colors. Unlike incandescent light bulbs or laser lights, LEDs are very energy efficient and can function for decades without burning out.

The Library's beam of light is installed on a 60-foot pole, with the top 55 feet lit with the LED display. The library roofline is 60 feet from the ground, making the entire structure nearly 120 feet high. The red light at the very top of the display only comes on with other emergency lighting when power is lost to the beam of light.

Community reaction to the light display has been positive overall, reports Steve Rollins, Dean of the Consortium Library. Susie Arnold of Facilities and Campus Services emailed the Chancellor and said, "Wow, there was the white sculpture with the amazing green beam ... the Arnold family gives three thumbs up — WE LOVE IT!" Medical helicopter pilots flying to Providence Hospital also like the beam of light since they can easily tell where the hospital is located.

UAA celebrated its 50th Anniversary in 2004. Now, its "Library of the 21st Century" featuring the "Beacon of Knowledge" is lighting the way for the next 50 years.