The Foucault Pendulum is named for the French physicist Jean Foucault (pronounced "Foo-koh"), who first used it in 1851 to demonstrate the rotation of the earth. It was the first satisfactory demonstration of the earth's rotation using laboratory apparatus rather than astronomical observations. 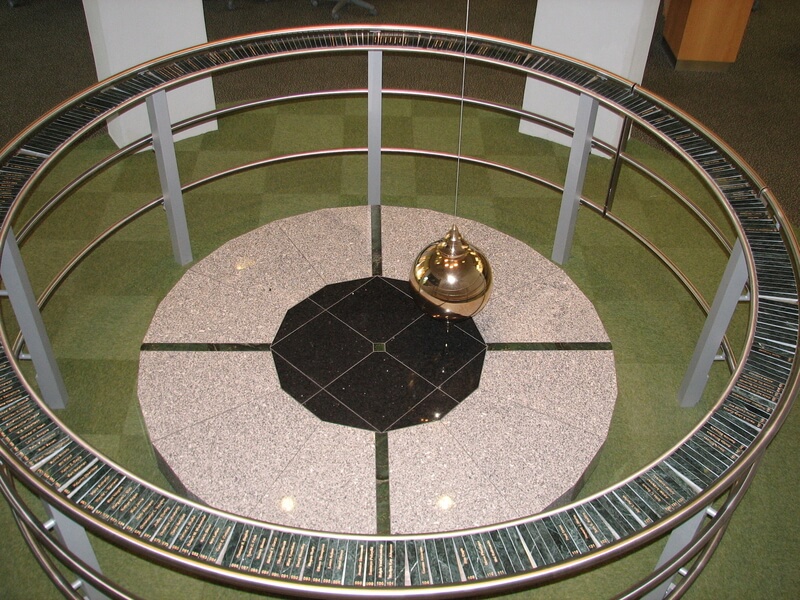 If you start a Foucault Pendulum swinging in one direction, after a few hours you will notice that it is swinging in a quite different direction. How does this happen?

Imagine you are in a museum located at the north pole and that the museum has a Foucault Pendulum suspended from the ceiling at a point exactly over the pole. When you set the pendulum swinging it will continue to swing in the same direction unless it is pushed or pulled in some other direction. (This is due to a basic law of nature called Newton's First Law.) The earth, on the other hand, will rotate once every 24 hours underneath the pendulum. Thus if you stood watching the pendulum, after a quarter of an hour or so, you would be likely to notice that the line of the pendulum's swing has changed to a different direction. This would be especially clear if one marked the position of the line of swing in the morning and had the pendulum knocking down pegs arranged in a ring at the center.

However, if you are standing on the floor of a building housing a pendulum (which is connected to the earth), you will naturally think that the floor is stable and the pendulum is moving. This is because we naturally assume that the base on which we stand is stable unless our eyes or sense of balance tells us otherwise. If our base moves slowly or accelerates smoothly, we are easily fooled into thinking that another object we see is moving. You have probably experienced this in a car, a train, or an airplane, that begins to move very slowly and smoothly, and for a split second you think that a nearby car, train, or even a building, seems to move. Thus, after thinking for a while about the total situation you might be willing to agree that what you are seeing is a real demonstration that the earth is rotating under the pendulum and that the line of swing of the pendulum just appears to rotate.

Any pendulum consists of a cable or wire or string and a bob. For a pendulum to easily demonstrate the Foucault effect, it should have as long a cable as possible (this one is 52 feet) and a heavy symmetrical bob (this one is hollow brass, weighing about 240 pounds). Like all pendulums this one loses a bit of energy with each swing due to friction from air currents and vibrations in the cable and other factors. Thus, left to itself the pendulum would swing in shorter and shorter arcs until after a few hours it will decrease almost to zero. To keep the Foucault Pendulum going, one must replace the energy lost with each swing. This can be done by giving the pendulum a little "kick" with each swing.

To do this, two iron collars are attached to the cable near the top. There is a doughnut-shaped electromagnet built into the ceiling, and the iron collar swings back and forth inside the hole of the doughnut. When the pendulum cable reaches a particular point in its swing, it is detected by an electronic device and the magnet is turned on at just the right time to give the collar (and thus the cable and the bob) a little "kick" in the exact direction of its natural swing. This restores the energy lost during the swing and keeps the pendulum from stopping. It has no effect on the direction of the swing, and thus does not interfere with the demonstration that the earth is rotating.

Some people have built their own pendulums; you don't need a ceiling 50 feet high. If you are interested in building your own, you might like to go to your library and read two articles from Scientific American magazine: pages 115-124 of the June 1958 issue and pages 136-139 of the February 1964 issue. You may also wish to contact the California Academy of Science in San Francisco, California.