Ever found the perfect book or article for your research, only to realize it’s not available anywhere in the state? I certainly have. Well, if this ever happens to you, you have two options. Give up and abandon all hope of finishing your research, or use our amazing Interlibrary Loan system to request your materials be sent to UAA from out of state. Assuming the better option, today, we are going to take a look at WorldCat and Interlibrary Loans!

First, there are two different processes we need to do depending on if you need a book or if you need a journal article.  If you would like to get a copy of an entire book, jump on over to WorldCat. WorldCat is a global catalog that can show you the availability of items outside of the Consortium Library and our partner libraries in state. It access WorldCat, click the link on our homepage right next to QuickSearch.

Once you are in WorldCat, you will be able to search for an item using their search bar. Then, select the book you are looking for to view more details about the book. Take for example this book, Once Upon an American Dream : the Story of Euro Disneyland. It is not owned by any library in Anchorage, or any others in the state. WorldCat does show you a list of libraries that own the book, but don’t worry you wont need that in order to request a book from Interlibrary Loan. Instead, there is a button off to the right that says “Request an Interlibrary Loan”. Clicking this button will take you to the Interlibrary Loan login page. Follow the instructions to login in and then once you are in, World Cat will pre fill out a book request for you using the information they have on the book. Make sure everything is correct and then you can submit your request at the bottom of the form. The Interlibrary Loan department will then take your request and figure out what libraries have a copy they can send us. In just a few weeks, the book will be here in Anchorage and available for you to pick up at the Circulation Desk!

“But what if I need an article from a journal?” I hear you say. Well no worries, instead of searching for an article in WorldCat, you can instead request an article directly from the Interlibrary Loan department. From the home page of the library, select the “Interlibrary Loan” link under “Services”. 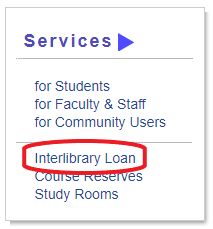 Login in the top center and then you will be taken to the Interlibrary Loan homepage. On the right side, there are several options, but you will want to select “New Request”. Select the type of material you need and then fill in all of the information you know, including title of the article, what journal it’s published in, what volume or issue, and anything else that will help the Interlibrary Loan staff locate what you need. In many cases with articles, they can be digitally scanned and sent straight to your ILL account to view online.

See, wasn’t requesting the perfect research materials from Interlibrary Loan so much better then giving up and trying to find subpar somewhere else. Good luck with your research and remember, you can always contact the Reference Desk if you every need assistance!

Ready for another dive into a super cool database you didn’t know you needed? Welcome to the Nineteenth Century Collections Online! As the name implies, this database is focused on primary source documents from the 1800’s, including diaries, letters, military orders, church records, newspapers, and more, all on a variety of hot topics from the era.

Are you a true crime fan interested in learning more about Jack the Ripper? Take a look at The Whitechapel Murders Papers. This collection contains numerous letters to the editor, from concerned citizens in London and throughout England. Here is one letter, from someone named W. Harrison, who claims to have seen on of the murders in their dream. They said they saw two men “of medium height, slim figures and respectably dressed” in their dream, and want detectives to investigate. At that point in time, were the police desperate enough to listen to the dreams on random citizens? You’ll have to read these letters for yourself to find out.

What about those of you studying to be actors, or just particularly enjoy theater history? You’d probably enjoy looking through the British Playbills, 1780-1861 collection. The Drury Lane Theater (which still exists by the way), performed several Shakespeare plays in 1826 and 1827, including Othello, The Merry Wives of Windsor, King Richard III, King Lear, the Merchant of Venice, and Macbeth. Drury Lane was not the only theater company performing Shakespeare either. The Covent Garden Theater spent their 1830/1831 season performing Romeo and Juliet, As You Like It, Much Ado About Nothing, Hamlet, and Henry VIII (advertised here as King Henry VIII).

If you have any interest in learning more about the nineteenth century, the Nineteenth Century Collections Database is a great place to finds some stunning primary source documents. Take some time looking around, and don’t forget, if you every need research help, or help navigating any databases, feel free to call, text, chat, or swing by the Reference Desk and we are more then happy to assist!

Daylight Savings is upon us once again, but have you ever put more thought into the event beyond remembering which way to change your clock? If not, you really should. Daylight Savings has plenty of effects on the world from finance, to medical care, to traffic safety. If you’re interested in learning more, take a look at some of these books and articles, and remember to move your clocks back an hour in fall.

Saving the Daylight: Why We Put the Clocks Forward by David Prerau

Losing Sleep at the Market: The Daylight Saving Anomaly by Mark J. Kamstra, Lisa A. Kramer and Maurice D. Levi

Daylight Saving Time and Artificial Time Zones – A Battle Between Biological and Social Times by Till Roenneberg, Eva C. Winnebeck, and Elizabeth B. Klerman

Does Daylight Saving Save Electricity? A Meta-Analysis by Tomas Havranek,  Dominik Herman, and Zuzana Irsova